6 Good Reasons to Study Logic
Why Analyzing Arguments Is Good for You
by Emrys Westacott
Emrys Westacott is a professor of philosophy at Alfred University.
Updated October 17, 2018 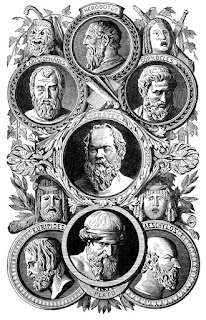 A first-year college student found himself repeatedly impressed by the wit and wisdom of the philosophy majors he met. One day he plucked up the nerve to ask one of them: "So how come all you philosophy majors are so smart?"
"Oh, that's no mystery," the philosopher answered, "we've all studied logic."
"Really?" said the freshman, "that's all it takes?  So if I study logic, I'll become super smart?"
"Sure. Of course, it's too late to sign up for a class now. But I'll tell you what, you can use my old logic textbook and study it yourself. Here, I've got it with me. I'll let you have it for $20."
"Wow, thanks!"
The deal was transacted and the first year excitedly went off with the textbook to ramp up his IQ. Later that day he ran into the philosophy major again.
"Hey," he shouted. "That logic book you sold me for $20—I came across it in the bookstore for $10. All that rubbish about logic making me smart. I see through it now. You were just ripping me off!"
"See," said the other, "it's already starting to work."
The benefits of studying logic might not kick in quite that quickly. But there really are good reasons to take a logic class or to study it yourself from a book or by using an online resource, even if you're not a philosophy major.
01
of 06
Symbolic Logic Is Fun
Studying basic symbolic logic is rather like learning a new language, but one with a small vocabulary and just a few rules of grammar. You learn to do all sorts of things with these new symbols: you use them to analyze the logic of ordinary sentences, to test arguments for validity, and to construct proofs for complex arguments whose validity isn't obvious. The exercises that help you become adept at these things are like puzzles, so if you like Futoshiki or sudoku you'll probably love logic.
02
of 06
Knowing Whether an Argument Is Valid or Invalid Is a Valuable Skill
Logic is essentially the study of reasoning or argumentation. We all use reason all the time to draw inferences that are useful to us. If our car won't start, we reason that the battery may be dead. So we test the battery. If the battery isn't dead, then we deduce the problem must lie elsewhere, perhaps with the starter motor. So we check the starter motor. And so on. In this example the reasoning is simple, but sometimes chains of reasoning can become quite complicated. Training ourselves to construct good arguments and to spot bad ones is a skill that is useful in just about every field as well as in everyday life. It helps steer us toward truth and away from falsehood.
03
of 06
Good Logic Is an Effective Tool of Persuasion
The art of persuasion is called rhetoric. Rhetoric, like logic, used to be an essential part of the liberal arts curriculum. Sadly, neither is usually required any longer, and rhetoric has given way to Composition 101. Rhetoric can encompass just about any means of persuasion short of bribery, blackmail, or physical violence. It includes, for instance, appeals to emotion, provocative images, or clever wordplay. There's no doubt that these can be persuasive; but so can good cogent reasoning. We're not saying that good arguments will always win the day over clever rhetoric: human beings are not Vulcans like Mr. Spock. But in the long run, good arguments will usually come out on top.
04
of 06
Studying Logic Helps You to Spot Fallacies
Fallacious thinking abounds in our culture. Politicians, pundits, advertisers, and corporate spokespersons attack straw men, appeal to majority opinion, pursue red herrings, or reject a view because of something they dislike about the person who holds it. Familiarity with common fallacies of this sort helps make one a more critical reader, listener, and thinker.
05
of 06
Logic Is a Foundational Discipline
Logic is foundational to any field that makes use of arguments. It has especially close connections to mathematics, computer science, and philosophy. Both Aristotelian logic and modern symbolic logic are impressive bodies of knowledge that constitute major intellectual achievements.
06
of 06
Clear Thinking Makes One a Better Citizen
Dubious techniques of persuasion, such as "criticizing" a candidate's views by showing an unflattering image of them, are used especially in election campaigns. They are no doubt sometimes effective, but that is no reason for preferring them to good clear argumentation. On the contrary, it's why we need logical thinking more than ever
April is the official month for:

Posted by paul babicki at 10:53 PM No comments:
Email ThisBlogThis!Share to TwitterShare to FacebookShare to Pinterest


April is the official month for:

Posted by paul babicki at 10:10 PM No comments:
Email ThisBlogThis!Share to TwitterShare to FacebookShare to Pinterest

April is the official month for: