15 Rules of When to Italicize in Email – Via Netiquette IQ

15 Rules of when to italicize in email – Via Netiquette IQ
Italics and the English grammatical rules of when to use them are one of the most flexible for the language. Normally, even the most subjective use of these is not considered wrong. Nonetheless, there are guidelines and conventions generally accepted for their use. Today’s blog seeks to list these as well as some other appropriate information.
+++++++++++++++++++++++++++++++++++++
This blog elaborates upon seven points outlined in Anis Siddiqi’s When to Italicize posted on April 7, 2010 featured in The Write Corner.
1. Emphasis. When you want to put an emphasis, or want a word or phrase to stand out from the rest.  For example:  You mean to say you wrote this?  Do notwrite on the wall.
2. Words as separate words. When words in a sentence are used as separate words. For example:  Don’t forget to italicize the word hope.  Committee is a word that is often misspelled.
3. Letters as words. When letters of the alphabet are used as words in a sentence. For example:  Put an X on the spot that needs to be fixed.  Don’t forget to cross your t’s.
4. Reproduced sounds as words.  Sometimes sounds are reproduced to bring effect to the writing. For example:  Thud, the parcel fell on the ground.  Bzzzzzz… the bee buzzed.
5. Foreign words. Foreign words and phrases that are unfamiliar to most readers. For example:  The lawyer says it’s a prima facie case.  “Namaste,” the Indian man folded his hands in greeting.
6. Titles. Titles of books, plays, magazines, newspapers, albums, movies, television shows etc. (Holy Books like the Bible, Koran, and others are not italicized.) For example:  Seinfeld is a popular TV program.  He reads the New York Timesevery morning.
7. Names of vehicles. Italicize names of spaceships, boats, trains etc. that are proper names. For example:  The Titanicsank after hitting an iceberg. The Acelais a fast train.
Additional Netiquette suggestions:
8. Titles of artistic works. For example: The Last Supper; The Mona Lisa .
9. Note. Roman true italic type, oblique type, sans serif and other typefaces do/may not have italic versions
10. Underscores and italics. Do not use underline and italics at the same time.
11. Technical Items. For example:  GMO; PTSD.
12. Use the same font family and size.  For example: The Pieta is a beautiful statue.
13. Punctuation. Don’t punctuate a comma unless it part of the title. For example: The Acela is a fast train.
14. Physical quantities and mathematical constants.  For example:  x + y = z.
15. Internal dialog. Use italics when someone is speaking to themselves. Euclid exclaimed Eureka!
Keep these points in mind and you will know when to italicize words. If you’re still in doubt, just use standard fonts.
Aloha!
+++++++++++++++++++++++++++++++++++++++++

I am the president of Tabula Rosa Systems, a “best of breed” reseller of products for communications, email, network management software, security products and professional services.  Also, I am the president of Netiquette IQ. We are currently developing an email IQ rating system, Netiquette IQ, which promotes the fundamentals outlined in my book.
Over the past twenty-five years, I have enjoyed a dynamic and successful career and have attained an extensive background in IT and electronic communications by selling and marketing within the information technology marketplace. Anyone who would like to review the book and have it posted on my blog or website, please contact me paul@netiquetteiq.com. 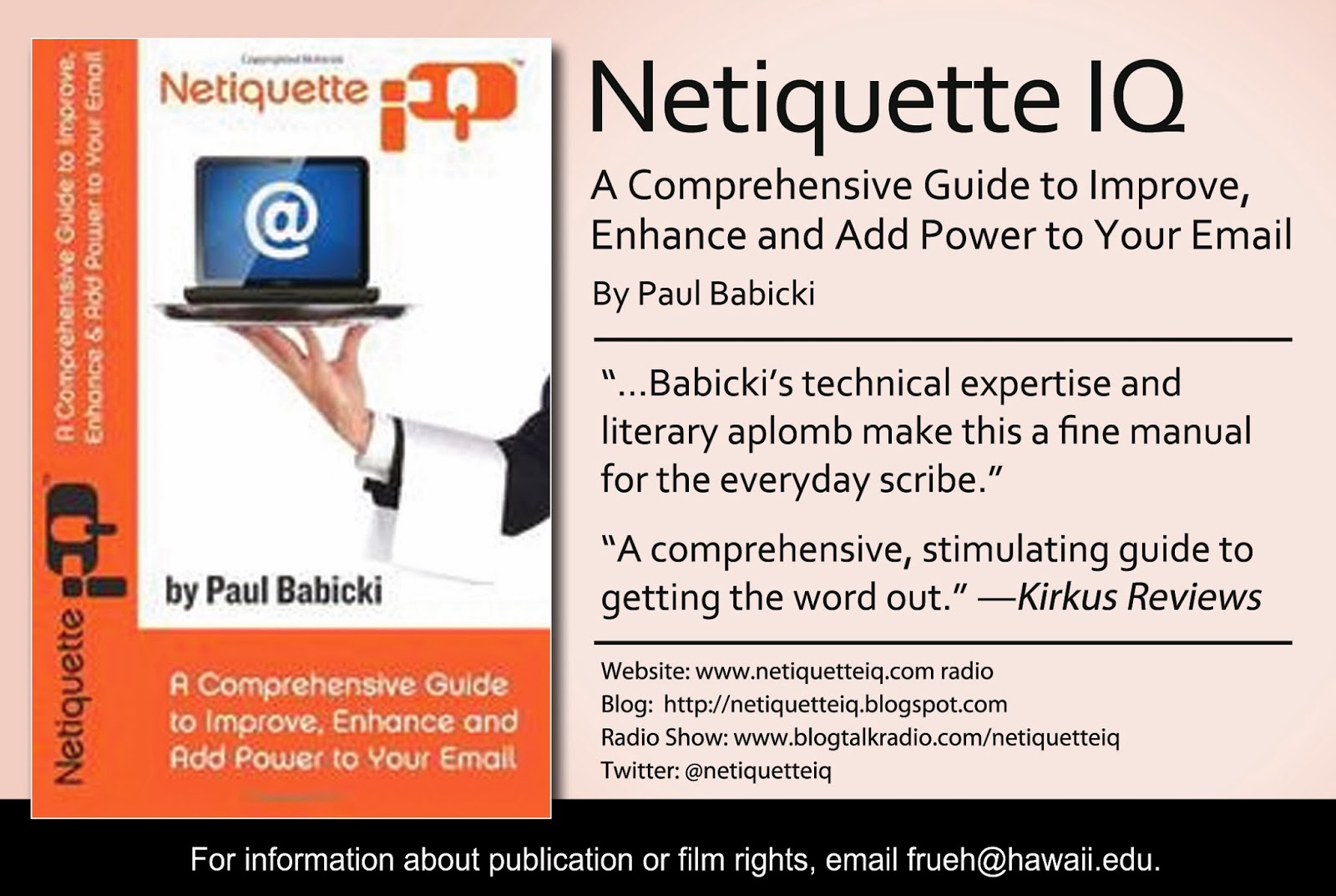 Posted by paul babicki at 9:02 PM
Email ThisBlogThis!Share to TwitterShare to FacebookShare to Pinterest