“NOTICE: We request every internet commenter carry out the following task today,” begins an email from the supervisor.

It’s just another day in the propaganda department of Zhanggong, a district in southeast China’s modestly sized city of Ganzhou. Employees and freelancers are paid to post pro-government messages on the internet, part of a broader effort to “guide public opinion,” as the Chinese Communist Party frequently puts it.

The details of these directives are usually hidden from public view. But thousands of emails obtained from the Zhanggong propaganda department by a Chinese blogger—and released on his website—offer a rare view into the mechanics of manipulating web conversation in China at its most local level.

Among the hacked documents are instructions to paid commenters, their posting quotas, and summaries of their activity. The emails reveal hundreds of thousands of messages sent to Chinese microblogging and social media services like Sina Weibo, Tencent, and various internet forums, including working links to the actual posts. All told, they demonstrate the Chinese state’s wide reach on the internet, even at the lowest levels of government.

Zhanggong’s propaganda department comes across as surprisingly large, yet comically unsophisticated. To get a sense of its inner workings, Quartz examined emails related to a single event: an online Q&A with the local Communist Party secretary earlier this year. What we found was a Potemkin online village of adoring citizens posting favorable messages and easy questions—all manufactured by the propaganda department.


Ganzhou’s urban population is roughly 1.9 million, according to the latest government figures, making it a relatively small city by China’s standards. Zhanggong district is Ganzhou’s administrative center and home to about 460,000 people.

“There are at least 5,000 districts this size or bigger,” said Qiang Xiao, editor of China Digital Times (CDT), a news site affiliated with the University of California Berkeley that first reported on the emails.

Despite its small size, Zhanggong employs nearly 300 wangpingyuan, or “internet commentators,” according to the emails.

People in China have long known that internet mercenaries are paid to post comments that laud government officials and attempt to influence public opinion. These commenters are widely known as as the wumao dang, or “50-cent party,” a reference to a 2010 editorial in the state-run Global Times that said commenters are paid 50 cents renminbi per post. During large protests or large-scale government screw-ups, it’s not hard to identify posts by wumao trying to influence the conversation.

“What I didn’t expect to find is that there are now wumao in virtually every department,” said Xiaolan, the blogger who obtained and released the emails. “I was really shocked.”
“Generally the passwords for government departments are the name of the department followed by ‘123456’ or something like that.”

Xiaolan—he only goes by that name—communicated with Quartz through encrypted chat messages. He said he was able to hack into Zhanggong’s propaganda department’s email account the easy way: by guessing the password.

“Generally, the passwords for government departments are the name of the department followed by ‘123456’ or something like that,” Xiaolan said. In this case, the mailbox password was “xcb123456,” with “xcb” representing the first letter of the romanization of each character in 宣传部—”propaganda department.”

“The most complicated passwords,” Xiaolan said, “are like name of department plus phone number.”

Ask me anything non-controversial
Shi Wenqing, an affable 60-year-old, was appointed secretary of the Ganzhou branch of the Communist Party—a position akin to mayor—in 2011. He sits on Zhanggong’s standing committee, giving him considerable sway over local politics.

He also appears to be a propaganda innovator. In April, Shi convened a meeting of his fellow party members in Ganzhou on improving their “system of propaganda thinking and culture.” An official report (link in Chinese) says, “Under Shi’s encouragement, attendees broke convention, and skipped small talk and discussion of personal achievements to get right to the point naming problems and offering solutions.”

Whether any of that is true, it shows that Shi wants to present himself as a fresh thinker to his superiors in the party.

The email mentioned at the top of this story suggests another way Shi tries to do things differently: He holds occasional “internet exchanges,” taking to television to answer questions posted on a forum run by a local news website. Shi is personable and polite, frequently beginning his answers with something like, “Thank you, my internet friend, for asking this question!”

But this is not like an Ask Me Anything session on Reddit: During Shi’s town halls, people are paid to post comments that make him and the government look as good as possible.

The internet exchange Quartz examined took place on January 16, 2014, with the online discussion hosted by Ganzhou Net, a local news portal managed by the propaganda department. (The full video of the interview is available online, in Chinese.) In its email announcing the Q&A to wangpingyuan, the department told each of them to post in the forum at least once, suggesting seven “discussion points” to focus on in their comments. Here’s one:
It’s almost Chinese New Year, but it seems like taxis are far more orderly than in past years. Also, taxi drivers are using their meters more reliably and the service is just generally better. Let’s keep it up!

Paid commenters tend to paste these suggestions word-for-word to meet their quotas and move on, and that’s what many of them appear to have done in this case.

Quartz compared the propaganda department’s discussion points to the full text of all the forum posts, and found that four of the seven were posted exactly as suggested at least once. The fourth, translated above, appears verbatim three separate times in the forum, each from an anonymous user. The first—about a new policy “giving Ganzhou wings”—was posted 17 times.

“These commenters just write their work report, send it, and are finished,” said Xiao, the CDT editor. “Their tasks are totally mechanical.”

Not all paid comments are copy-and-paste jobs, however.

In 2012, Chinese artist and dissident Ai Weiwei offered to buy an iPad for any wangpingyuan willing to answer questions about their work. Asked if they ever take liberties with their posts, the commenter who spoke to Ai said, “When transferring the attention of netizens and blurring the public focus, going off the topic is very effective.”
#PartySecretaryFaceToFace# I firmly believe Party Secretary Shi can lead Ganzhou to a better tomorrow. (Tencent Weibo)

Indeed, subtle comments are probably more effective than verbatim copies. “The netizens are used to seeing unskilled comments that simply say the government is great or so and so is a traitor,” Ai’s interviewee said. “They know what is behind it at a glance. The principle I observe is: don’t directly praise the government or criticize negative news.”

That commenter looks to be more nuanced than most: In Zhanggong, barely anyone observes this principle. The text of an email sent to the propaganda department from Zhanggong’s Dongwai subdistrict shows three comments that are unmistakably intended cast Shi and the government in a positive light (translated here into English):

Pro-government sentiment is not limited to the Ganzhou Net forum, as the post from microblogging service Tencent Weibo above shows. Another email, sent to the department from the Jiefang subdistrict on January 20, lists 127 messages related to Shi’s “internet exchange.” They were posted on the Ganzhou forum, Tencent Weibo, and Sina Weibo, the country’s largest microblogging site. Here is a sample:

6. #PartySecretaryFaceToFace# I firmly believe Party Secretary Shi can lead Ganzhou to a better tomorrow. (Tencent Weibo)
17. #PartySecretaryFaceToFace# The government works so hard, and the results are easy to see. The happy people give our compliments. (Sina Weibo)
80. The greatest achievement we’ve seen since Party Secretary Shi took over has been securing national support for Ganzhou’s revival plan. Advantageous new policies await us, and we thank you! (Sina Weibo)
109. Party Secretary Shi’s dialogue with internet users is the embodiment of connecting with the people. It’s commendable how he is taking in the views of the public. (Tencent Weibo)

In addition to posting directly, commenters use accounts that repost the right kind of messages, like a retweet on Twitter.

On January 19, three days after Shi’s interview and just as state news outlets began running stories about it, the department sent an email telling wangpingyuan to repost, “especially on Sina Weibo,” agreeable comments using the hashtag “#PartySecretaryFaceToFace” (our translation). It tells each “internet commenter unit” to “repost 200 or more times before 5:00pm on January 21.”

The 200-post quota probably backfired. Most commenters appear to have done the bare minimum needed to fulfill their requirements and send their work report.

For example, one Sina Weibo account used for reposts is “suaisydua”. An email summary informs superiors that the account made 70 related reposts during the specified time. That user’s Sina Weibo page reveals that all 70 reposts happened within 30 minutes of each other. As anyone who has used Twitter knows, 70 retweets in a half hour is not the most effective strategy.

There’s additional evidence that that account is under the government’s thumb. A March 5, 2014, email mentions that suaisydua is “one of 113 Weibo repost participant accounts” that would no longer be used for that purpose. The post history matches up. Beginning the next day, the account stopped its stream of reposts related to politics and Shi, moving on to more mundane topics like the opening of a local play and “12 kitchen-cleaning techniques you didn’t know.”

Some comments are more subtle. One post in the discussion forum, which is also mentioned in a summary email to the propaganda department, expresses love for Ganzhou before sneaking in an endorsement for a controversial urban development project: “Ganzhou has made great strides, it’s a new dawn for us! We’ve even started work on the Rongjiang development project. Ganzhou is adorable and charming.”

This is just a small event in a small town

It’s not clear the degree to which paid comments influence the conversation the way Communist Party members hope they do. Xiaolan thinks it’s bad enough that they “take up space on your computer.” CDT’s Xiao says the paid commenters could be adding noise to the conversation simply to drown out normal people’s desire to converse online.

The Zhanggong propaganda department’s efforts around Shi’s Q&A, at least, reveal an effort that is large in scale but weak on quality.

But urban Ganzhou is home to just 0.1% of the Chinese population. The campaign may not have been particularly intricate, but Shi’s department was able to deploy hundreds of commenters to sway public opinion in his favor. A single event on a single day generated dozens of emails and over a thousand comments on forums and microblogs. There are many Chinese cities bigger than Ganzhou, and each likely has a propaganda department at least as large. Issues of national attention presumably are subject to still more elaborate efforts.
===========================================================
In addition to this blog, I maintain a radio show on BlogtalkRadio  and an online newsletter via paper.li.I have established Netiquette discussion groups with Linkedin and  Yahoo.  I am also a member of the International Business Etiquette and Protocol Group and Minding Manners among others. I regularly consult for the Gerson Lehrman Group, a worldwide network of subject matter experts and I have been contributing to the blogs Everything Email and emailmonday . My work has appeared in numerous publications and I have presented to groups such as The Breakfast Club of NJ and  PSG of Mercer County, NJ. 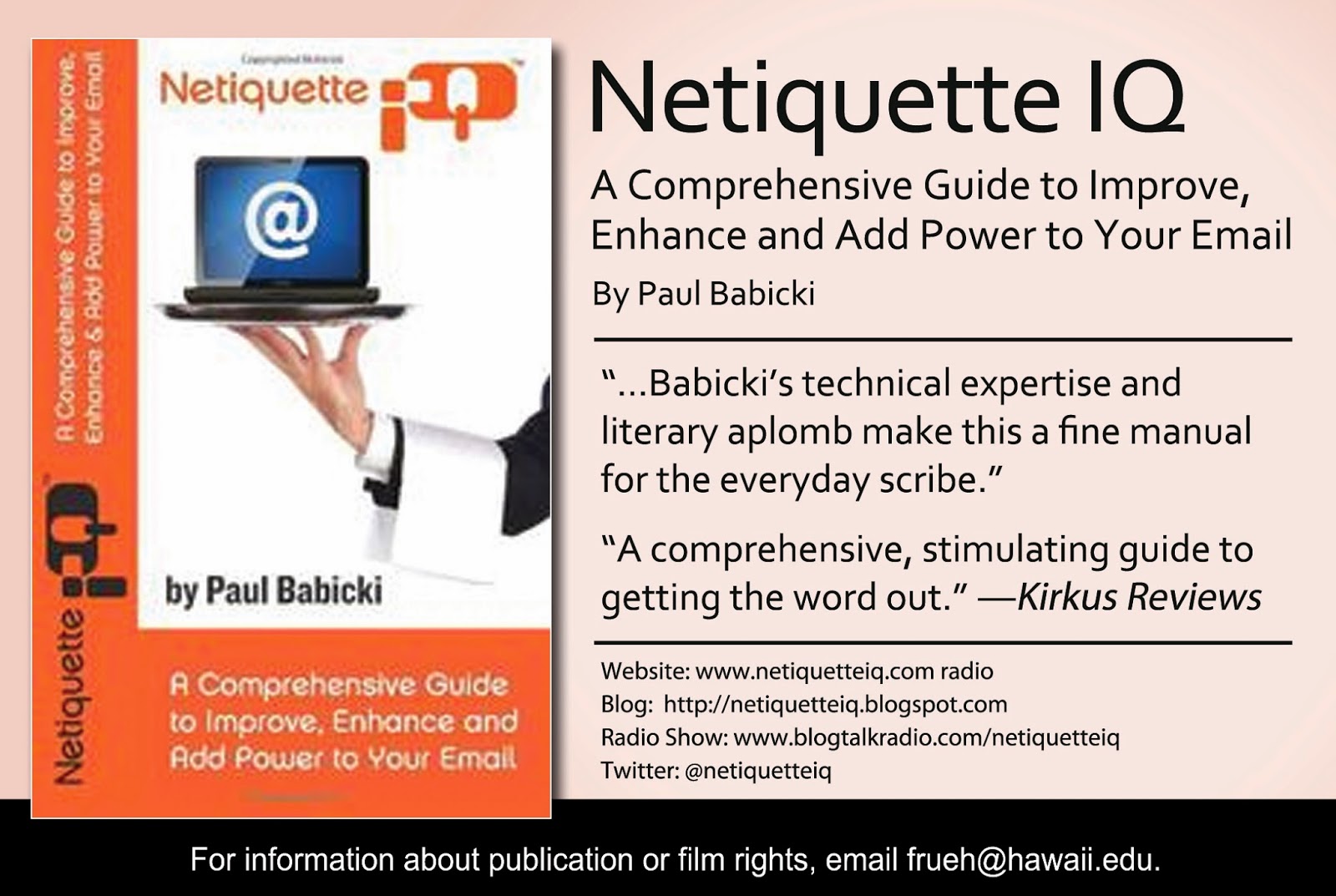 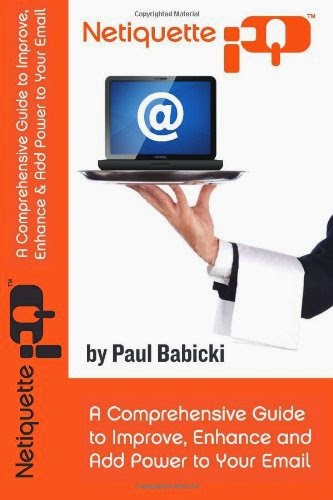 Posted by paul babicki at 7:48 PM
Email ThisBlogThis!Share to TwitterShare to FacebookShare to Pinterest